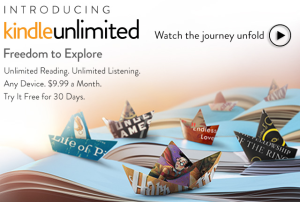 I’ve noticed several of the articles on Amazon’s bold decision to offer a subscription for unlimited eBook downloads seem to claim that this move is “bad for authors.” That’s probably because these articles were written by people who aren’t authors or publishers and certainly not indie authors. We’ve published 40 books here in the last 70 days, and I’ve been active in the publishing industry since before there was such a thing as an eBook. I can assure you my predictions about how this will affect authors and the publishing industry in general is much better informed.

In short, don’t worry authors. Bezos hasn’t suddenly declared war on you. In fact, Bezos is continuing to take bold steps to declare with no ambiguity that indies are his friends, and publishing companies are his bitter rivals–at least until they change their business model and start publishing exclusively on Amazon instead of trying to sell books on every retailer imaginable. And no, Archangel Ink is not necessarily a “publishing company” so we’re not threatened either. We’re more like a steroid dealer for indie authors. Do you even lift Poe?

In the past, eBooks that were published exclusively with Amazon (through the KDP Select program) could be borrowed as part of the Kindle Owner Lending Library (KOLL). A fund with an undisclosed amount was set aside, and that pool fund was divided by the total number of borrows in any given month. If the fund was $1 million, and 500,000 books were borrowed in a month, the average borrow would be worth a $2 payout to authors. Most authors will agree that $2 is about the current average payout per borrowed book, and book borrows have typically resulted in 5-10% of total book revenue depending on the price of the book (the higher the price, the more likely someone is to borrow it for free).

The Kindle Unlimited program will work the same way basically, with a few caveats.

First off, what the hell is it? It’s a new subscription that allows readers to pay $9.99 monthly and download as many books as they want. The books that are available in the program are only those that are exclusively published with Amazon (mostly indie published books). Most of the traditionally-published books are not published exclusively, and will continue to remain expensive, but now there’s another even stronger deterrent to buying them: Why pay $10 for a traditionally-grilled steak when you’ve got 600,000 burgers that you’ve already paid for? I mean, steak is great and all, but it costs quite a bit more and takes a lot longer to chew.

What it boils down to is that more readers will be downloading and reading indie-published books. I also believe and hope, although I can’t confirm this quite yet, that each KU download will count as a “sale” in Amazon’s ranking system. If so, you’ll also see all the indie titles appearing at the top of every category, because the number of KU downloads is going to be staggering. How staggering? I’ve seen an 670% increase in 48 hours. Keep in mind the following graph was taken with 3 hours and 18 minutes remaining in the day, and presumably another 5-10 KU/KOLL units will come in by then.

That’s 4 KU/KOLL units on the 16th (average has been 6-7 this month) going up to 44 on the 19th with over 3 hours to go. Let’s conservatively say from 6.5 to 50–and call it a 670% increase. Ignore the paid units which seem to be slipping along with it–those were elevated sales due to a 99-cent promotion. Sales today are on par with the rest of the month before KU hit.

Although I’d be lying if I was to say I’m not at least a little bit fearful that this will hurt the number of paid sales. This graph on one of our top-selling books is the only thing that gives me pause about this whole KU thing. Yikes!

Speaking of 99-cent promotions, our platform launched a book all the way to #4 in the Kindle store on Wednesday, with three more in the top #100. Just thought I’d mention that.

If that’s where it is after a couple days, where’s this thing going to be in several months? A year? Will an Amazon exclusive eBook that used to get five sales and one KOLL borrow per day be getting five sales and ten KU downloads daily? Twenty? I think it could be even higher, and I also think that these KU units will improve sales rank in proportion to the number of KU downloads, making Indie-published titles that are published through KDP Select top all the bestseller lists. My only real fear with this move is that it is so aggressive that traditional publishers will finally submit to Amazon’s might, join the indies, and start publishing exclusively through Amazon.

But even if they do, I still think they’ll be losing out, because price and book length will be irrelevant to KU shoppers. The author that writes 30, 25-page, 99-cent books per year will completely obliterate authors writing 500-page beasts in total sales. A KU download is a KU download, and each one pays the same whether your book is 10 pages or 1,000. The cheaper the book, the higher the sales rank, the more visible it is to KU browsers, and the more downloads it’s going to get.

I think this is yet another powerful incentive to follow the “write, publish, repeat” model of book publishing.

The other remaining question is: How much will authors get paid per KU download?

No one knows yet, but I bet it’s going to be pretty decent considering Bezos’s primary motive, which is to make publishing on Amazon exclusively as attractive as possible. Up until this point, the KOLL units typically contributed no more than a buck or two per day per book for most authors, so I can’t help but assume that it can only get better. I’m keeping my fingers crossed that they’ll be worth $1 or more and amount to several downloads daily for most moderate-ranking books, and an extra $100 monthly or more plus extra paid sales due to improvement in sales rank. Even if they pay 2 cents, if each download counts as a sale in the ranking system, and traditionally-published titles start to suck wind because of the glut of KU subscribers avoiding the titles that cost extra to read, that will far outweigh any direct payment an author receives from KU downloads.

If they don’t count as sales, well then, this could be kinda grim. It’s hard to tell right now and I can’t seem to locate an answer to that question. If anyone knows for sure, please enlighten me in the comments.

We shall see. I for one am eager to see what’s coming around the next corner on the crazy Kindle rollercoaster ride. Everything that’s happened in the publishing world over the last decade has been extremely beneficial to authors thus far, and I don’t see any reason to suspect that this bold move is going to derail that trend any time soon–especially for indies.

The last remaining question I have is how the audiobook market will be affected by this, as Kindle Unlimited allows you full access to audiobooks as part of the dilly as well. As a producer of 70 audiobooks and narrator of 44 and counting, I’m certainly curious, but I have no clue. Personally, roughly 20% of my book revenue comes from Audible Listener Member bounties, which is far above what a typical author averages. It certainly seems that will be negatively impacted by this new membership with presumably no bounty payment. No freaking idea, but as I study the changes I see in the coming months, I”ll be sure to report back.

16 thoughts on “Kindle Unlimited: Good or Bad for Authors?”